We set out for Embalse El Yeso (Gypsum Dam), east of Santiago heading into the Andes. Since the last 22 km of the route are unpaved, I wasn’t sure how far we would get. Along the way is the Cascada de las Animas, an area that sounded like it would be good for bird watching, so we went to look for condors. Other birders reported seeing a variety of interesting and endemic species on this route.

This beautiful facility only offers guided activities, so we moved on. The artist/architect who created the center has a studio nearby and makes unique creative objects, up to and including houses at his Taller Pangal

Along the road we saw two new birds:

White browed ground tyrant. This internet photo shows the rufous patch on his head that was a good identifier:

Chimango caracara is common but it took us a while to identify it. They spend a lot of time on the ground–eating dead things, I believe.

I’m still looking for the little guy with the white patch at the end of the tail….

We got all the way up to the lake without seeing any condors. Well, we might have seen a condor but it ducked behind a mountainside. The road to the Embalse El Yeso was a bit hazardous:

We saw lots of evidence of rock falls and flooding.

There was scenery all over the place, including a glacier. We’d wanted to see a glacier in Patagonia, but it involves more hiking than we could do. We were driving up the valley when I saw a glacier while I was scoping for condors. 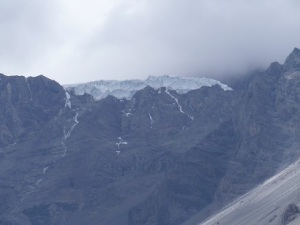 We made it to the reservoir. The name of the river, dam and reservoir, El Yeso, refer to the principal product of the area, gypsum, and explains the cavalcade of trucks going both ways that disrupts birders (and others). There is a cement plant at the junction of the unpaved and paved roads, too. It shows the conflict between environment and economy. The dam belongs to Aguas Andinas, Santiago’s water company, and a banner at Cascada de las Animas says “No more hydropower in the Alto Maipo,” alluding to plans to expand some aspect of the operation at the dam.

Man-made and low on water (down a few meters) it may be, but the reservoir is bright blue and attracts birds–can we ask for more? I don’t know whether there are any fish.

The view was spectacular, and about 5 minutes after I photographed the mountains the mist moved in and covered the far peak.

After our picnic and a bit of strolling around, we turned back. We’d seen a few birds but no condors, and decided they might be slightly lower where there would be more food–the landscape is pretty bare around the dam and reservoir. Jonathan drove and I scouted for condors. We got down to roughly the area where we thought we’d seen one in the morning. A bit greener than the reservoir, a few grazing animals, with very steep mountainsides: 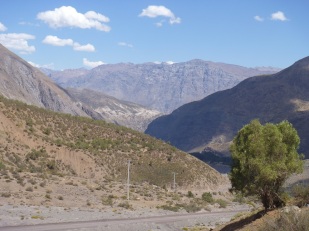 This is where we spotted two condors and pulled over to watch them soar. They circled back and forth for a while, giving us a chance to identify their rectangular shape with wings spread, a flash of white on the back and neck. A third condor was so high that it appeared only when I was looking at the others, a tiny flying spot in the background. We watched until they flew so high there was little to see. Condors in the wild, how about that?

The condors were definitely a high point, because we got back into Buin at rush hour on the afternoon of the first day of school and the line in the supermarket was approximately 4 billion people long. It took an hour to buy water and cookies, but the vision of condors helped.