The weather in Talca is like August in the US, cool in the morning and evening and  very warm during the day–today’s high was 33 C (91 F). On Saturday, we visited the market in Chillan, a town to the south. It was more than a square block, with booths selling fruit, vegetables, meat, fish & shellfish, clothing, household goods, even some souvenirs. I couldn’t resist petting the ducklings.

We enjoyed seeing the bustle, and noticing that the market was within a block of a HUGE mall. The presence of malls doesn’t seem to have put much of a dent in the markets, at least not yet. There were also some of the unusual things that you sometimes see, like the guy repairing his car across the street from the mall.

Leaving the market, we stopped in the main square, the Plaza de Armas, where there is a huge cross erected in honor of Bernardo O’Higgins, one of the heroes of Chilean independence, born in Chillan. In the plaza we found a very pink flowering tree:

Across the street from the plaza was a small souvenir area where i found silver earrings made from coins dating to 1925.

On the way home we passed two dust devils, larger than anything I’ve seen: 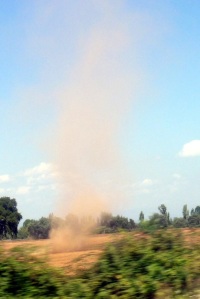 From a distance, I thought it was a plume of smoke, but it rose straight into the air, and Chile is rarely without a breeze. The base looked like it was boiling.