Having a guest really gets you up and going. With my sister Catherine we hit high spots of the region so that she could take away a sense of western Sicily. Three themes emerged, landscape, beaches, and archaeology. 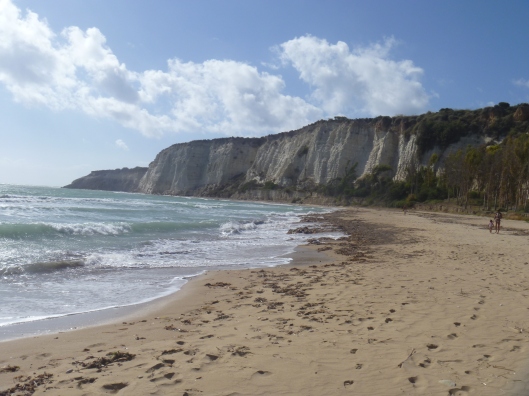 Huge rocky hills emerge from the sea, yet just beyond are broad plains of wheat in one area, olives and grapes in the next, then the dark green citrus leaves of lemons and oranges.

The nearest airport to us is Palermo, located on a huge bay called the “Golden Shell”. From there we visited Erice, a tiny town outside Trapani that is perched on a high hill. Its medieval streets are largely intact, and the view out over the coast and the Mediterranean is superb (see opening photo). 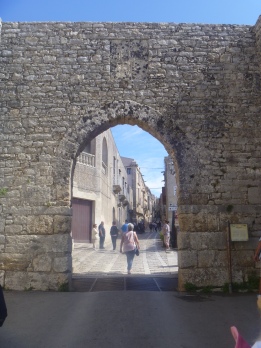 On another day we went to the opposite side of the Golden Shell to Punta Zafferano.

We saw the sea up close, where an abandoned lighthouse presides over the rocky coast and the waves plunge, swirl and surge onto the rocks. The “road” narrows to the width of a cart. Fortunately we were able to make about a 37 point turn and park, so that we could have our picnic. Opened the trunk to find that the picnic was still on the table at home…. “Forced” to eat out, we asked help from a woman we saw in nearby Porticello, and she led us to the improbably named Gasthaus Grill, where we had excellent seafood pasta.

Other days led us to the beach. The beach closest to our house is San Marco, but based on the recommendation of our host, Stefania, we went to Aloha Beach a bit further along. It was good for a swim and had great beachcombing; we found beach glass and intriguing colorful pebbles and sandstone carved into fantastic shapes by the wind and tides.

In tandem with visiting an archaeological site we stopped at the beach in Eraclea Minoa, and combined marveling at the chalk cliffs (2nd photo above) and beachcombing followed by drinks on the terrace of Garibaldi, a restaurant/bar/beach club still open at the end of the season. The high tide washes under the building so you feel that you are on a ship. So far we have been to three of the beaches along the Mediterranean coast. We look forward to seeing many more of them.

The other resource found everywhere in Sicily is archaeology, and in this Sicily shines. There are many Greek temples on the island, and other layers of history as well, from the Elymi, the earliest named people, to the Greeks, Punic (north African), Roman, Byzantine, Muslim, Viking, Norman, Angevin (French), Aragonese, and Bourbon (Spanish), We began with the biggest and most impressive archaeological site in Sicily, the Valley of the Temples at Agrigento. Great trivia: The Temple of Concordia at Agrigento is the source of the logo for UNESCO World Heritage sites.

Agrigento is the most visited site in Sicily but was not nearly as crowded as some of the places we visited near Naples. Called the Valley of the Temples, it has five Greek temples built along a ridge overlooking the sea. The Temple of Concordia is most complete, and the others range from nearly complete to a heap of column fragments. A huge wall along the ridge was honeycombed with tombs carved at a later time. 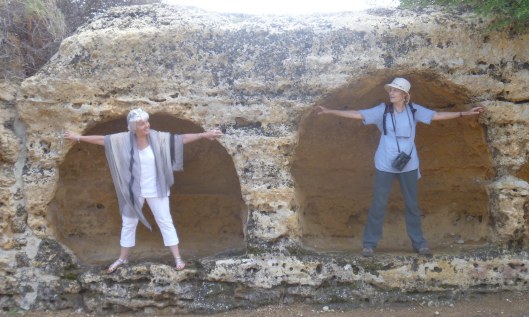 These are some of the innumerable tombs that were carved out of the old city walls. Many were so full of tombs that sections collapsed. These tombs are all shapes, from small boxes to large domes.

The Temple of Concord is the best preserved, but the other temples are imposing. 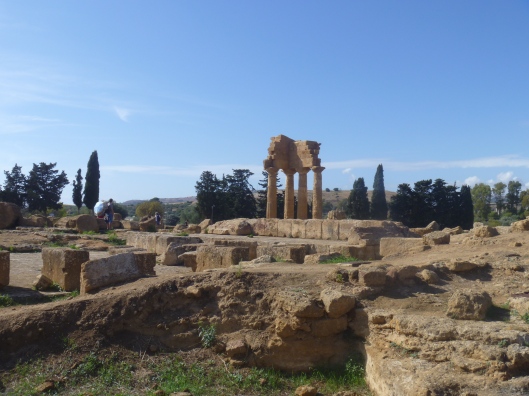 Temple of the Dioscuri 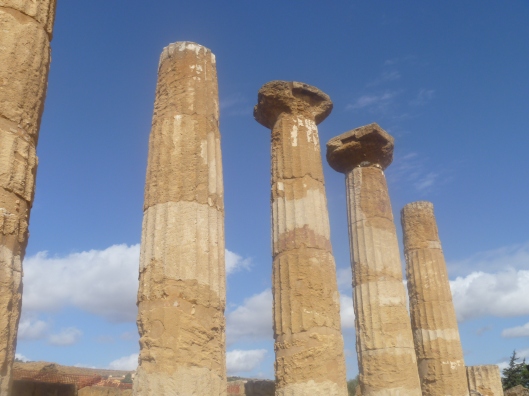 There were piles of broken columns, and broken segments with deep U-shaped grooves in them. I don’t know what they could have been used for. 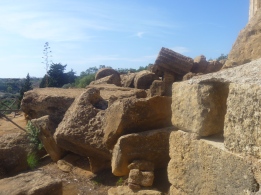 We also visited the site of Heraclea Minoa, a huge valley covered by an ancient city. Most of the site remains unexcavated, and here you see the competition for attention among archaeological sites. Agrigento is the most visited archaeological site in Sicily and who can match five Greek temples? Heraclea Minoa is extensive but not as attention getting as Agrigento. It has far fewer visitors as a result and is also not as well kept up.

The cover over the amphitheater at Heraclea Minoa reminds me of a scene from a James Bond movie.

For the moment, these are the three axes of Sicily: landscape, beaches, archaeology. We’ll see what happens next week.