La Paz has terrible traffic. We picked up our rental car less than 1 km from our hotel and drove back to the parking structure. Sunday morning we planned to drive to Tiwanaku. Google Maps and our phones suggest a route crossing the heart of the city. We opted for the slightly longer highway route that circle the city center. Sunday’s are often a good day to drive in large cities. Traffic can be lighter because it’s not a work day.

Not for us. Today was the first Sunday closing of the highway to permit its use by cyclists. It was only supposed to have closed a single lane, but the entire area was blocked off, so we gritted our teeth and followed the directions on Google maps. What a disaster! Who writes the algorithms that send you from a blocked highway into a Sunday market! We were trapped in a maze of streets as we very very slowly worked our way around a large area blocked off for the day. As we felt our way along the edge of the market, we crossed intersections that let through one car on each green light, another in which all streets were one way the wrong way because the market had closed off the only through street. We fought taxis and combis (van buses) to turn back at two dead ends, waving back the cars coming toward us to the same fate. We seemed to have made it to the far side of the market area after almost an hour and our directions sent us up a hill. The street was open as we started up but there was only one lane, the rest of the street was taken up by parked cars. We got half way up and cars started streaming down. We held up opposite an empty parking space so that vehicles could get around us, waiting for another gap to get the remaining half block.

Car after car funneled into the street. After ten minutes or so, I said, I’ll go up to the corner and stop traffic. Jonathan encouraged me to wait. After all, the street was empty when we started up. Five more minutes and the street was full up to our front bumper. I was getting a bit worried. Just then the front corner of a full-sized bus began to emerge from the right and turn into our lane. I got out of the car and ran the half block up the hill. I forgot we were over 12,000 ft and by the time I arrived in the intersection, panting heavily, the bus was already inching toward Jonathan. Cars were barely moving. I began waving my arms. “Stop! Stop! No! Back!” I shouted at them. I yelled that a car had to get out. No one wanted to stop but I stood in the intersection. A cab tried to get around me, but I stepped toward him waving my arms and using my mom voice. He was going to create gridlock in another few seconds. “Back, back up!” I stepped toward the front bumper of his black station wagon taxi still creeping forward. “BACK!” He began to reverse. Another car began to pull ahead and I waved my hand and shouted “NO.” Then a car indicated it wanted to pull away from the mess in the direction we ultimately wanted to go. I waved them on. Another followed. I looked back down the street. The green and yellow bus was still choking the street, a giant inchworm trying to move ahead. There was some movement, though slight. I turned my head back to the intersection still waving and shouting. Two cars back, the honking began, but I waved my arms, “No, No, Not until it’s clear!” The bus had begun to worm its way past Jonathan. He was almost clear, so I kept shouting.

Two women at a sidewalk stall were grinning at my antics, some crazy foreigner shouting at the traffic in Spanish. Then they pointed and shouted. Jonathan was finally coming up the hill. He stopped in the middle of the intersection, I opened the door, got in and shouted my thanks as we drove off. The ladies waved. 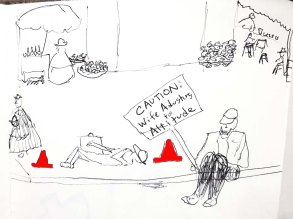 Waving my arms frantically and yelling at two lanes of oncoming cars is hard work at 12,000 ft and the second I sat down in the car, I wilted, my head began to burn with a full-on migraine, and I grabbed a bottle of water. It was just overexertion at altitude and in a few minutes my blood pressure was back to normal and we were climbing up the side of the valley away from the city center and on to Tiwanaku.  At that point, I opted to pop a mouthful of coca leaves and some activating ingredient, which put my mouth immediately to sleep and then miraculously cured my headache.  Some traditional medicine is worth its weight in gold.

Postscript: We may be dumb but we’re not stupid. We are never driving in La Paz again. We’re parking our rental at the airport and taking a taxi in. We learned our lesson.