Kjerstad, Norway is a degree or two of latitude north of the Arctic Circle. We have been here two days and already experienced the midnight sun–or as good as. Both nights Jonathan has said, “OK, going to bed now,” and I’ve said “What time is it?” and been a couple of hours off. It’s light all night as far as I can tell, so I close my eyes and then it’s dark. Works great, especially if you just had a long day or two of travel from Portugal.

We are here because of Airbnb. Almost a year ago, Jonathan was browsing places in Europe we might visit and called me over to look at a house in Norway. The house was attractive and the price moderate. He discovered that it was above the Arctic Circle; we could be in the Land of the Midnight Sun for a whole month. After some contemplating, he contacted the owner to see whether the house would be available in June 2016 and we signed up. This is the only time we’ve selected a rental on Airbnb on a whim. June is here and we’ll see how it goes. 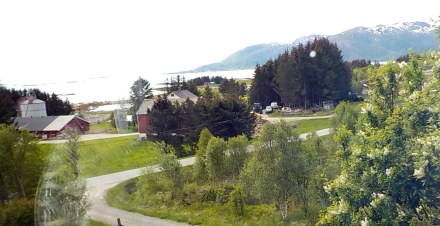 View from the upstairs window.

The island where Kjerstad is located is called Tjeldøya, Oystercatcher Island. We have already seen the namesake bird here. This area is the northernmost (northeasternmost) end of the Lofoten Islands.

Though it’s not the farthest north you can get, it’s pretty far north. Interesting factoid: The Lofoten chain has the greatest differential between actual temperature and the temperature expected based on latitude. That is, it’s relatively warm for the location. Lucky for us! Our first day in Kjerstad was so warm that I didn’t need a jacket. I found an ancient Norwegian tanning bed: 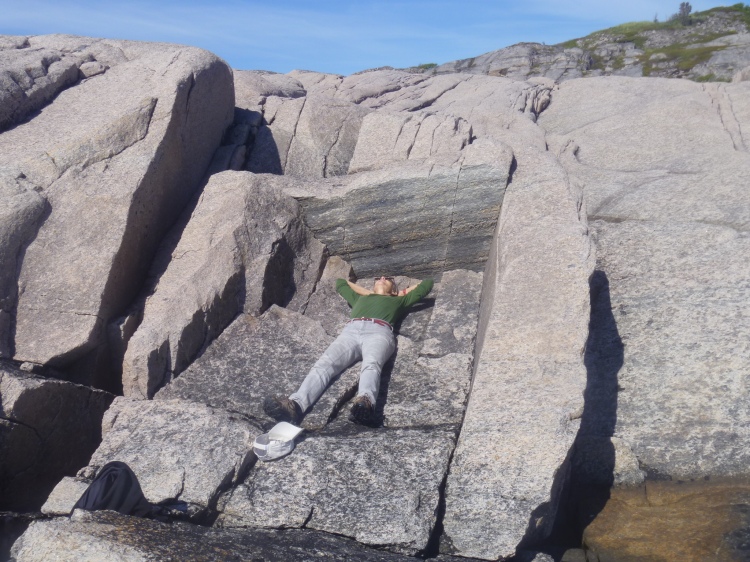 It’s an eye-opener to compare Norway to the other countries we’ve visited. It is smaller than both Morocco and Peru, with a population of 5.1 million (one-sixth or less of the population of Morocco or Peru), It’s population density 17 people per sq km, the lowest of any country I’ve looked at. Keep in mind that more than 30% of the surface of the country is classified as “other.” In this case it means “rock and mountains,” ruling it out as living area. Rather than being an underdeveloped backwater, however, Norway has one of the highest PPP (per capita income) recorded, $47,513. Compare that to Portugal ($14,101), Peru ($12,195), and Morocco ($8,165). Further, Norway has one of the highest scores on the Human Development Index, .934, meaning that an individual has a lot of opportunity for education and employment. We notice that the Norwegian language is used as a tool for incorporating immigrants. The night clerk at our hotel in Oslo spoke Norwegian to other guests, and though we couldn’t guess where he might have come from originally, his Norwegian had only a slightly different accent than the people he was speaking with.

Norway is a bit different than the countries of the EU. It is not a member, so uses the Krone (NOK) rather than the Euro. Norway is a member of the European Economic Area (EEA), and that provides free movement of people and goods through the EU. The only country besides Norway with this status is Iceland. It might sound like Norway has the best of both worlds, EU access without the Euro. That’s not necessarily the case. Though Norway has free movement of people and goods, it does not receive the benefits of EU price supports for certain products. For this reason, food prices in Norway are on average 75% (or more) higher than the same products in EU countries. 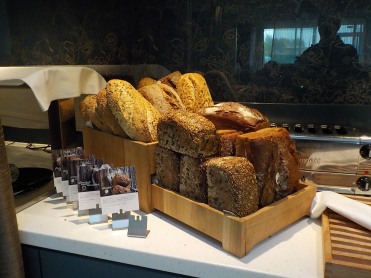 There were delicious breads and crackers at the breakfast buffet–at what cost?

High costs are offset by the fact that Norway has the largest oil and gas reserves and is the largest producer and exporter of oil and gas in Europe (though 21st globally). The petroleum industry is heavily regulated, and contributes about 45% of total exports and 20% of GDP. What makes Norway different than other countries during the downturn in oil prices today is that it holds the largest “sovereign wealth fund” in the world. That is, Norway has been saving money from the oil and gas industry in a rainy-day fund that will help it weather the present upheaval. The government can spend up to 4% of the fund each year to stabilize economic conditions.

I believe it is no coincidence that Norway is one of the world’s least corrupt countries. The top personal income tax rate is 47.8 percent, and the corporate tax rate is 27 percent. Other taxes include a value-added tax, a tax on net wealth, and environmental taxes. Summary: there are no bargains and individuals pay a lot of taxes, BUT they get what they pay for in excellent services and infrastructure.

One thought on “You’re where? June in northern Norway”